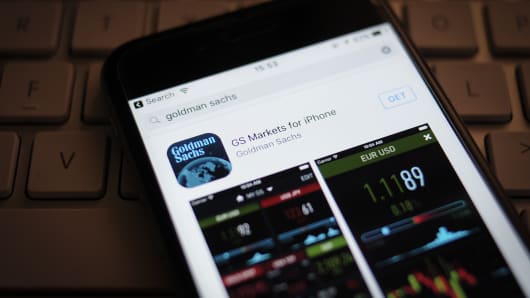 Jaap Arriens | NurPhoto | Getty Images
The Goldman Sachs banking application is seen in the App Store on an iPhone on November 15, 2017.

Apple and Goldman Sachs are close to testing a new jointly created credit card that syncs with the iPhone, according to a person with knowledge of the product.

The card will be piloted with employees of the two companies in coming weeks, according to the person, who declined to be identified speaking before the product is available.

For both companies, the card represents a step into new territory. Faced with slowing growth in sales of its most popular hardware, Apple is seeking to bolster its revenue from services. It would get a larger slice of so-called swipe fees from the new credit card than it currently takes from card purchases through Apple Pay, according to The Wall Street Journal.

For Goldman, which became a traditional bank after the financial crisis, it’s the latest move to seek more revenue from ordinary consumers. For most of its 150-year history, the firm’s clients were institutional investors, governments and big corporations. In addition to its first credit card, the bank is planning to expand its roster beyond the savings and personal loans it currently offers to include wealth management and insurance products.

The card, which is set to launch to the public later this year, will allow users to manage their spending and rewards though an iPhone app, according to the Journal, which first reported the news.

Apple engineers have discussed using visualization tools, similar to its fitness app, to help users manage their personal finances, according to the newspaper. In concept, it sounds similar to Goldman’s Clarity Money app.

Users will earn 2 percent cash back on purchases and possibly more on Apple products and services, the newspaper wrote. It will run on the Mastercard network.

Goldman hopes to eventually use the card as an entry to pitch its consumer finance products to Apple customers. The companies had discussed plans to have the card be part of a broader personal finance tool, but scuttled the plans after Apple executives expressed privacy concerns with linking to bank accounts, the Journal wrote.

Tags: a and Apple Be card credit employees First Goldman iPhone-linked New Of The users will
Categories: Loan