Economists boosted their forecasts for U.S. fourth quarter growth Wednesday, after a surprise narrowing of the trade gap in November due to a drop in imports.

Several economists said the decline was likely a direct result of the trade war with China, and nudges U.S. growth higher, at least temporarily, while China is slowing.

Economists participating in the CNBC/Moody’s Analytics Rapid Update raised growth forecasts by 0.2 percentage points to a median 2.7 percent, on a tracking basis. Some economists expect growth to be affected even more and edged their forecasts up closer to 3 percent, though there are still some outstanding economic releases not yet available after the government shutdown.

November’s U.S. trade gap in goods and services fell 11.4 percent to a seasonally adjusted $49.3 billion, about $5 billion narrower than expected. Both imports and exports declined but the drop in imports was more dramatic and caused the deficit to narrow.

As the U.S. trade war appears to have temporarily driven up U.S. growth, it is not helping the global economy.

“America’s trade fight with the world has finally started to slow global trade and only time will tell whether this is a good thing for the economy in the long run,” noted Chris Rupkey, chief financial economist at MUFG.

“Net, net, the Trump tariffs and trade war with the world appears to have halted some of those imports at the border as the trade deficit fell from the widest levels seen since before the recession over a decade ago. Oil and cellphones and consumer goods imports fell the hardest. It is possible that some of the consumer goods imports were brought into the country in greater numbers to build a stockpile before the import tariffs took effect or grew even worse,” he said 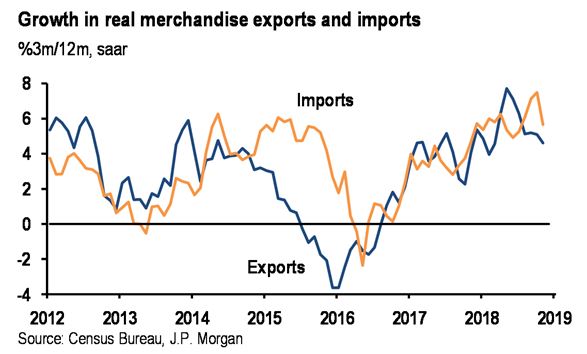 “Trade is weakening all around the globe and in November, we cut back on imports more significantly,” said Mark Zandi, chief economist at Moody’s Analytics. “It could very well be the effect of the tariffs, some front loading and now the tariffs are fully in place, businesses cant’t eat it. They’re passing it through. People are seeing higher prices. These numbers month to month are highly volatile. The finger prints of the trade war are clearly on this report.”

Zandi said he raised his forecast for fourth quarter GDP growth by 0.6 percentage points, to 2.7 percent.

“Less trade in the long run is not a good thing…It’s a near term plus, but the lessons should be if there’s less trade, that’s definitely a hit to our long run living standard,” said Zandi.

UBS economist said they would hold their growth forecast steady at 2.4 percent for now for the fourth quarter.

“The fall in imports is an arithmetic positive for US GDP growth, but indicates a sharp weakening in domestic spending. We are trimming our estimates for inventories such that they offset the weakness in imports,” the UBS economists wrote. “That assumption is a risk to our forecast: if the decline in imports reflects a reduction in demand for inventories, the impact on growth is close to neutral. But if the weakness in imports reflects a reduction in production, the net effect is a negative for GDP: the positive from lower imports is more than offset by the loss of sales and of the value added in production.”