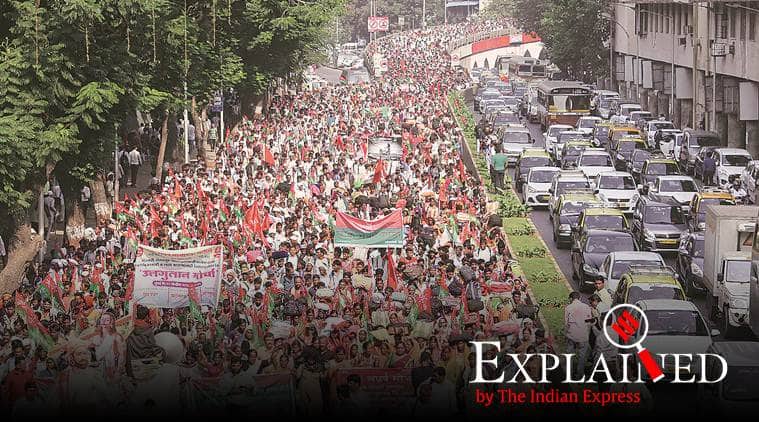 A march by farmers from Thane to Mumbai in November 2018, demanding an unconditional loan waiver and compensation for drought. Archive

Last week, the new Maharashtra government announced a loan waiver for farmers who had up to Rs 2 lakh in pending loans between April 1, 2015 and March 31, 2019. Maharashtra thus became possibly the only state to have offered two consecutive farm loan waivers within two-and-a-half years of each other. The previous loan waiver was announced by the Devendra Fadnavis government in June 2017. A look at why this loan waiver was considered necessary, and how it is different from the earlier one:

The loans, the defaults

At the start of the cropping cycle, banks extend short term credits to farmers to finance their need of capital for purchase of seeds, fertilisers etc. Financial institutions usually provide this loan at 7 per cent interest. Timely repayments allows farmers to get a 3 per cent interest subvention from the central government and a further 2 per cent subvention from the state government, thus effectively reducing the interest rate to just 1 per cent. This is envisioned to help farmers access credit at the right time and keep them away from the clutches of money lenders who lend at exorbitant rates.

However, a spate of extreme weather events, like droughts, floods, hailstorms etc, often results in farmers defaulting on their repayment. As of September 30, 2019 the outstanding crop loan in Maharashtra was Rs 1,08,781.90 crore. Defaulting farmers become ineligible for new capital from the banks and are forced to knock at the door of private money lenders.

To help the farm sector, state governments have time and again announced loan waiver schemes. Back in 2008-09, the then UPA government at the Centre had announced a loan waiver scheme for the entire country. States like Madhya Pradesh, Chhattisgarh and others have announced similar schemes in the recent past.

Faced with an unprecedented farmers’ strike, the Fadnavis-led government had announced the Chhatrapati Shivaji Maharaj Shetkari Sanman Yojana in June 2017. Irrespective of the size of landholding, the scheme waived off outstanding crop loans up to Rs 1.5 lakh per family. Farmers who made regular repayments got Rs 25,000 as incentive for good credit behaviour. The scheme waived off loans pending from April 1, 2012 to March 30, 2016. Later, this was extended to include outstanding loans from 2001. Farmers whose outstanding was more than Rs 1.5 lakh were expected to deposit the additional amount to get the waiver. For example, for an outstanding of Rs 2 lakh, the farmer was to deposit Rs 50,000 in the loan account after which the government agreed to waive off Rs 1.5 lakh.

Government records show about 44 lakh farmers have benefited from the scheme so far, with loans worth Rs 18,600 crore having been waived.

Unlike the previous loan waiver, this latest scheme will see outstanding crop loan up to Rs 2 lakh, pending from April 1, 2015 to March 31, 2019, being waived off. Farmers with more than Rs 2 lakh outstanding are not eligible for the scheme. Also, the scheme has no incentive for farmers who are regular in their repayments. Farmers’ activists have criticised these two provisions which they say defeats the purpose of loan waiver.

Thackeray and senior minister Jayant Patil have talked of extending the scheme later to cover farmers with more than Rs 2 lakh outstanding as well as for farmers who are regular with repayments.

A new provision in the present scheme is that families with more than one loan account are eligible for waiver in each one of their accounts. The last waiver was limited to one account per family. Also, this time farmers will not have to file online forms to avail their waivers. It had led to major confusion last time.