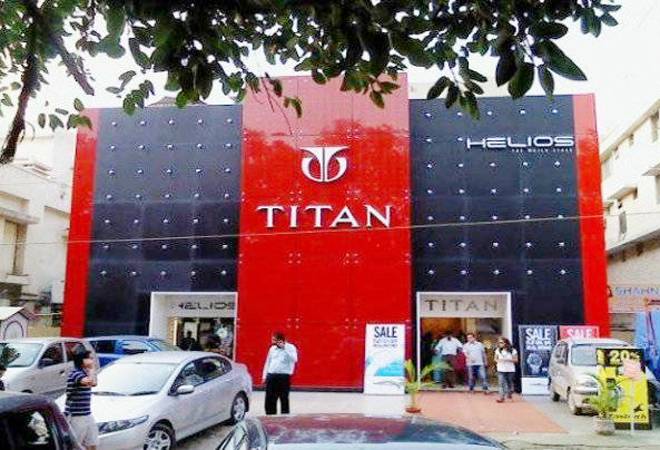 Ace investor Rakesh Jhunjhunwala’s pet stock Titan Company’s share price has been hit by a series of downgrades from global brokerage firms, lacklustre June quarter and a rise in import duty on gold during the last 10 days. Rakesh Jhunjhunwala and his wife Rekha Jhunjhunwala together held 7.04 per cent stake in the company as of March 31, 2019. Titan Company share price which stood at Rs 1,328 level on July 3 has lost 17% since then due to a flurry of downgrades, a dim June quarter for jewellery business and rise in import duty on gold from 10% to 12% in Union Budget 2019.

It took just six trading sessions for the stock of jewellery-to-watch maker to lose 256 points to hit intra day low of 1,072 today compared to a high of 1,328 level on July 3.

Here’s a look at what went wrong for the jewel of consumer goods industry during the last 10 days.

Morgan Stanley downgraded the firm to equal weight from overweight with a target of Rs 1,300 per share. The brokerage said growth moderated in core jewellery business more sharply than their expectations. The reported growth likely implies flat- to low-single digit revenue growth in month of June with same-store sales decline.  Stock is expected to trade weaker in the near term. The brokerage has given a target price of Rs 1,300 on the stock.

Credit Suisse downgraded the stock to neutral from outperform with target unchanged at Rs 1,250 per share.

The firm’s stretched valuations and near term softness limit upside for the stock. The brokerage is positive on medium-term on the stock.  It has lowered earnings estimates by 2% and advised investors to look for a better entry point in the stock.

HSBC too downgraded the Titan Company share price to hold from buy, maintaining the target price at Rs 1,300.

Hike in import duty on gold

Budget 2019 made provisions to raise import duty on gold and precious metals to 12.5 per cent, from current level of 10 per cent. It is to be noted that India is one of the largest gold importers in the world. In 2018-19, India imported gold worth $32.8 billion. The hike in import duty is likely to make gold costlier.

Noting the challenges Titan Company stock faced during the last ten days, BusinessToday.In  finds out how the  top consumer goods stock is likely to move ahead of the upcoming festive season.

Amnish Aggarwal, Head of research at Prabhudas Lilladher said, “Gold prices have risen by 10% in last two months and 2.5% increase in import duty from 10% to 12.5% has also added to inflation. Further, movement in gold prices will be function of events in the international market. Past evidence suggests that whenever gold prices have strengthened close to 10%, usually there is an impact on demand for gold for one to two quarters after which customers get accustomed to new price and the demand comes back. As this has coincided with the poor consumer sentiment in general, it has got reflected in the June jewellery volumes of Titan.

The jewellery-to-watch maker on Tuesday said very high gold prices particularly in June impacted growth in the jewellery industry. First quarter of the current fiscal saw a tough macro-economic environment with consumption taking a hit. This is despite Akshaya Tritiya and Guddi Parva sales being robust as gold prices increased after that.

Now if the prices sustain at the current level or they rise, and the consumer sentiment does not improve, there is a possibility that consumer demand will be hit in the festival season as well.

If gold prices remain high, then the next quarter could also be under pressure and a lot depends upon guidance by the company at the time of 1Q Results. However, in the long term, the story remains intact. At around Rs 1050- 1100 range, investors can consider buying the stock in the long term.

We believe that festival season will be a big test of trends in demand of gold. Near term outlook seems somber, unless we see significant revival in consumer sentiment in the coming months.”

Romesh Tiwari, Head of Research at  CapitalAim said, “Raising of import duty will have a negative impact on leading jewellery makers only for the short term, given that the gold prices are already at higher levels. Although this will not impact the profitability of jewellery makers in the long term as they can easily pass this rise to the buyers. The demand for gold in India is expected to rise around Dhanteras and Diwali festivals and will offset the short-term impact of increased import duty.

Valuation of Titan was already at the higher end and the rise in import duty set the stage for fall in jewellery segment on July 5 and it closed down at 1278.10.

On Monday, it dipped further and closed around 3% lower. However, on Tuesday, the company expressed concerns over the slowdown in jewellery segment and that coincided with reports of downgrades by global brokerage firms citing the higher gold prices and valuations, accelerated the slide in the stock price with heavy volumes and closed at 1098.95 down more than 12%.

The market share of Titan and the brand value makes it a good long term investment at lower levels. If the prices come down to sub 900 levels, it will be a good buying opportunity for investors. Traders should avoid buying at these levels and can even go short at any rise above 1250 levels for short term with a stop loss of 1,295.”

Motilal Oswal Securities lowered the earnings per share (EPS) estimates of the firm after it said jewellery business in June quarter was subdued. Company management stated that growth, particularly in jewellery segment, was lower than planned in 1QFY20. Consequently, the brokerage has lowered earnings per share estimated by 2.7% and 1.8% for FY20/21. It has maintained Buy position with a revised target price of Rs 1,500.

Brokerage Sharekhan has a buy call on Titan Company stock with a target price of Rs 1,320.

“Titan registered moderate revenue growth of 13% in its jewellery business (vs. our expectation of 16%) as higher gold prices affected Q1FY2020 demand. Other key businesses such as watches and eyewear delivered strong performance by achieving 19% and 13% growth, respectively. We have cut FY2020/FY2021 estimates by 7% and 4%, respectively, to factor in lower growth in the jewellery division and lower margins.

The stock has corrected by 12%, factoring near-term headwinds; we maintain Buy with a revised price target of Rs 1,320, as the long-term growth story remains intact, ” Sharekhan said.

In Q4 of last fiscal, Titan Company reported a 14.4% rise in its consolidated net profit.

The maker of Titan watches and Tanishq jewellery made provisions to the tune of Rs 46 crore for investments made as part of treasury operations in inter-corporate deposits in the IL&FS Group. Total income increased to Rs 4,945.06 crore for the quarter under review as compared to Rs 4,125.69 crore in the same period of 2017-18, Titan Company said.